The Chimborazo with its 6268m is the highest mountain in Ecuador. Its main summits are four: Veintimilla, Whymper (or Máxima), Politécnica and Nicolás Martínez. The first two are frequently climbed; On the other hand, the Politécnica and Nicolás Martínez summits have few ascents and a higher difficulty, especially the Nicolás Martínez summit, which is the lowest although the most attractive and difficult in the Chimborazo. There have been numerous explorers who have fought against these glaciers precisely baptized in their name: Stübel, Thielmann, Humboldt and García Moreno, among others, and of course, the summit "Whymper" in honor of its first conqueror. Not so long ago scientists discovered that the Chimborazo summit is the furthest point from the center of the Earth and the closest to the Sun, a unique quality among all other mountains. 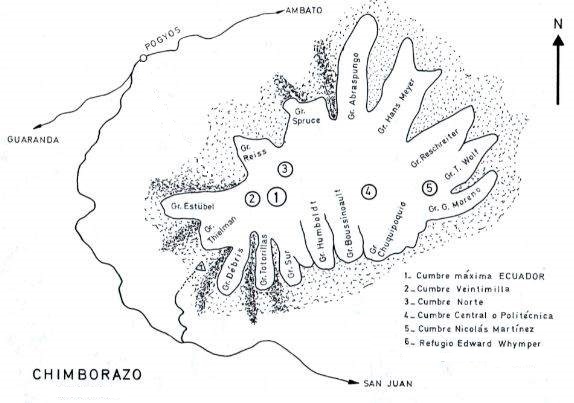 The Chimborazo was considered for some time as "the highest mountain in the world", a name that probably had its origin with the first explorers who visited it, among them the famous Alexander von Humboldt. At that time little or nothing was known about the great Himalaya mountains and those located south of the Equator. It was this fame that proved to be an irresistible temptation to the famous English mountaineer Edward Whymper; who after conquering the Matterhorn, which was considered as one of the last great ascents in the old continent, since most of the desired mountains had already been conquered, decided to invite the Carrel brothers to go out in search of new adventures in lands almost unknown to Europeans. Edward Whymper and the Carrel brothers were the first to ascend to the summit of Chimborazo; at a time when it was considered impossible and nobody had an idea of ​​how the human body could react at that altitude. They weren't completely wrong about "the highest mountain in the world", because in recent times it has been determined that the Chimborazo summit is the furthest point from the center of the Earth, likewise, it could be said that it's the "closest to the Sun". 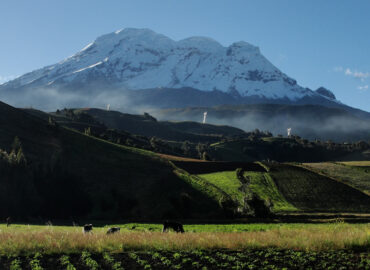 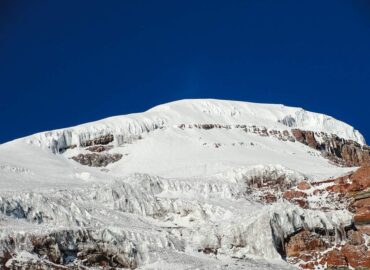 Way to the Veintimilla Summit 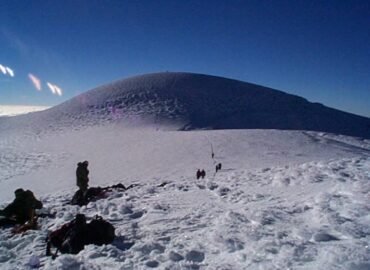 1) Ambato Approach: Just arriving at Ambato from Quito, you take the "Rodrigo Pachano Lalama" avenue to the right that goes around the western side of Ambato and leads to the Ficoa neighborhood. This avenue ends up calling "The Guaytambos" while it crosses the district of Ficoa towards the south, little beyond the Tungurahua Club, changes the name to "Manuelita Sáenz". Continue south until you arrive to Antonio Clavijo Avenue, where you have to turn right to take the E491 motorway in the direction of Guaranda. This highway is paved. Approximately 64 kilometers away you should see the sign on the left that indicates the detour to Riobamba and the Chimborazo refuge. 10 km. additional following this asphalted road and it'll appear on the left the detour sign to the Chimborazo refuges. Right on this place is the access control to the "Reserva de Producción Faunística Chimborazo" protected area. The last section is ballasted and arrives after approximately 7.3km at the Carrel Refuge, it’s normally possible to get there by any vehicle. In total 81.3km, 1h30min, from Ambato – Ficoa to the Carrel Refuge parking lot.

2) Riobamba Approach: Take the E35 highway in Riobamba, which goes northwest towards the towns of Licán and Calpi, then the 492 highway until you pass the town of San Juan and take the detour to the right that leads to Ambato. From Riobamba there are approximately 18.2 km until this detour, and an additional 23 km per pavement to the "Reserva de Producción Faunística Chimborazo" access control. In total 41.2km to the Carrel Refuge parking lot.

3) "Abraspungo" Approach: This approach is used above all to ascend to the Carihuairazo. Also it has served in few occasions to ascend to the Chimborazo by its North face. Continue along the Ambato Guaranda until you come to the detour to the left that leads to the Carihuairazo refuge. Just ahead you can see the sign that indicates access to the Cunuyacu Community. If you have left Ambato, this detour will be 13.2 kilometers before reaching the detour to Riobamba and the refuges of Chimborazo.

4) "Urbina" Approach: Starting from the old Urbina train station, you can find some 4×4 roads that lead to the eastern slope of the Chimborazo. This approach is rarely followed and used only to ascend the Nicolás Martínez summit. One of the best ways to approach the eastern face of Chimborazo, when coming from Quito, is to take the paved detour to the Urbina Train Station and continue until you find a sign to the right that indicates access to San Rafael de Chuquipogyo little town. Or simply, start the walk at the Urbina station.

There are some attractive hiking trails: 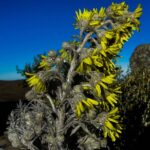 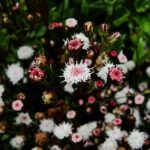 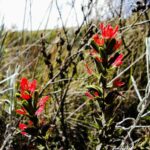 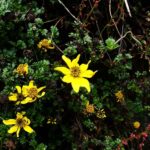 The Chimborazo volcano is located 150 km south of Quito and at 6268 meters above sea level, it is the highest volcano in the Northern Andes. It is built on the Western Cordillera, being the southernmost volcano of this mountain range. It is a volcano composed of three successive buildings. Basal building, mainly effusive, which would have been active between 120 and 60 thousand years before the present. Its construction would have occurred in two stages, the last being the formation of a complex of domes. This building was affected by a large sectoral collapse that occurred 60-65 thousand years ago, the same one that produced an avalanche of debris whose deposit is distributed over the plain of the city of Riobamba, covering an area of ​​280 km2 with an average thickness of 40 m and an estimated total volume between 10 and 13 km3. After the emplacement of this avalanche, the activity recommenced in the eastern zone of the collapse scar, progressively building the Intermediate building. The activity of this one took place between 60 and 35 ka AP (Samaniego et al., 2012). The remnants of this building are the Politécnica and Martínez summits. Finally the activity migrated towards the west of the building initiating the construction of the youngest building whose summit, Whymper, is also the highest.

The estimated average eruptive rate for the Chimborazo during its history is approx. 0.8 km3 / ka. However, there is a decrease in the same from the oldest building to the current, with the eruptive rate of the latter being around 0.1 km3 / ka. During the Holocene, the eruptive activity of the Chimborazo consisted of explosive events of small volume at regular intervals. The most recent eruption would have taken place between the beginning of the 5th century and the end of the 7th century. The average interval between eruptions is 1000 years and therefore the Chimborazo is considered as a potentially active volcano. The presence of the glacier cap on the summit, the steep slope of its flanks and its location so close to the populated areas of Riobamba and Ambato, are factors that result in a high potential risk.