Cotopaxi is an active stratum volcano found in the Cotopaxi Province, Cordillera Oriental, eastern bastion of the Nudo de Tiopullo. It is a very photogenic volcano with a perfectly symmetrical cone and a glacial mantle that covers it from an approximate elevation between 4600 and 4900 meters to its summit at 5897 meters. Cotopaxi is probably the most visited mountain in Ecuador, and definitely the most climbed among the so-called "high mountains" over 5200 meters high. The crater has a diameter of between 600 and 800 meters and a depth of about 150 meters, at the bottom of which are constantly seen emanations of gases and water vapor, a clear example of its recent volcanic activity, particularly intense in 2016 and 2017 in which it was closed to tourism. The average slope is about 30 degrees, having deeply cracked glacier sections, especially on its eastern flank. Another striking feature is the Yanasacha wall near its summit on the north face, it is seen as a black spot and is sometimes mistaken for its crater. The Cotopaxi has the widespread reputation of being the highest active volcano in the world, a mistake, since that honor corresponds to Ojos del Salado (6891m), in the Argentine-Chilean Andes, with fumarole activity and record of ash emanations from the year 1993. 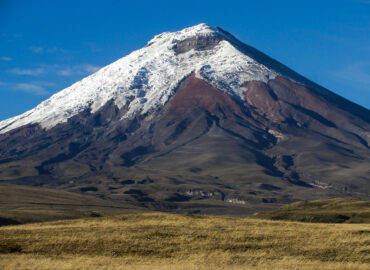 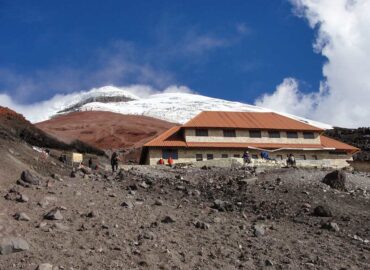 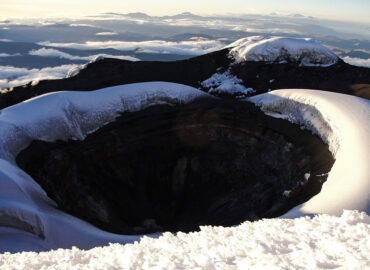 Eastern Cordillera; 55 kilometers in a straight line southeast of Quito; 18 km from the Panamerican Hw at the town of Lasso; 24 km from Machachi; 34 km from Latacunga. There are four routes of approach to Cotopaxi:

1) Normal Approach "Control Caspi": From Quito take the Panamerican Hw towards Latacunga, passing Machachi you go up to the Nudo de Tiopullo and then go down towards Lasso, just finishing this descent you will find a well-signposted detour that indicates the exit to Cotopaxi. The access road to the park is paved for the most part, the Caspi control of the Cotopaxi National Park is located halfway. It is mandatory to register at this control; Information about the park is also offered and there are different facilities such as a handicraft store and restrooms. The pavement ends a few kilometers above the control, there continues the old ballast road that leads to the Laguna de Limpiopungo, or to the Jose Ribas Refuge parking lot on the north face of the mountain. This route is advisable for any vehicle up to the Laguna de Limpiopungo, the ascent to the refuge may require a 4 × 4 vehicle.

3) "El Pita" Approach: From Sangolqui, "Redondel del Choclo", it is taken to the south by the Juan de Salinas avenue, following everything straight it will end up arriving at the Cotopaxi National Park North Control.

4) "Cara Sur" Approach: From Quito, follow the Pan-American towards the south, you pass the detour to the Cotopaxi National Park South Control and continue on the Panamerican for about 4.6km more, take the deviation to the right to leave the highway and cross the two roundabouts heading on the "old Pan-American Highway". 1 more kilometer to the south and it is necessary to take to the left, just in front of "Aglomerados Cotopaxi". It's more or less straight, following the direction of the Ticatilin commune, from there a single road continues to Rancho Maria and the Cotopaxi "Cara Sur" Refuge. This road is appropriate for 4×4 vehicles.

There are some attractive routes in the Cotopaxi area: 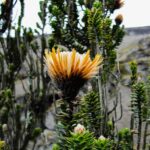 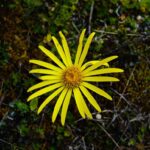 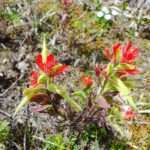 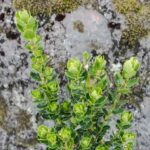 The first historical eruption happened in the year 1534, just in the days of the Spanish conquest, intimidating conquerors and conquered. Then followed a time of peace until 1742, the year in which it suddenly awakened from the centennial lethargy, causing the melting of the snows and a terrible flood with great destruction in its immediate regions. The events of this eruption were narrated by the Jesuit priest Luis Sodiro. The eruptions began in 1742 and continued until 1744, when the strongest eruption occurred that destroyed part of Latacunga and caused great damage to the haciendas located in Los Chillos Valley. The volcano calmed down until 1766 when it exploded again with great force, for two years, causing enormous damage and completely lightening its load. That was the last eruption on that century. In the nineteenth century small eruptions occurred in 1803 and 1854, this last year kept its activity for 15 days. The last great event was the terrible eruption of June 16, 1877, considered one of the most tragic in the history of Ecuador, and whose effects and damage so far are seen in various sectors of the volcano. The instantaneous melting of the ice cap generated a great flood that affected many population centers located along the rivers that drain the volcano, causing a high number of human and animal victims on the towns and haciendas, as well as crops dragged by the flows of mud. Then it remained more than a century with minimal activity until today. In 2015, steam columns and moderate explosions were seen in the crater that forced the closure of the volcano in August of that year and the prohibition of any mountain activity. There has not yet been an eruption as recorded in history, rather the volcano has begun to deplete its activity and so it was possible to open it for tourism on October 4, 2017. Currently hundreds of ascensionists have returned to crown its summit, adorning their photos with a slight puff of steam, very necessary to warm up in those cold winds.